I needed to buy a Basilisks but didn't want to waste time getting it rigged for the T2 shield rigs, so brought one of a contract in Jita. Fitted it up as the standard WTM fit.

This is the screenshot in EFT using my skills: 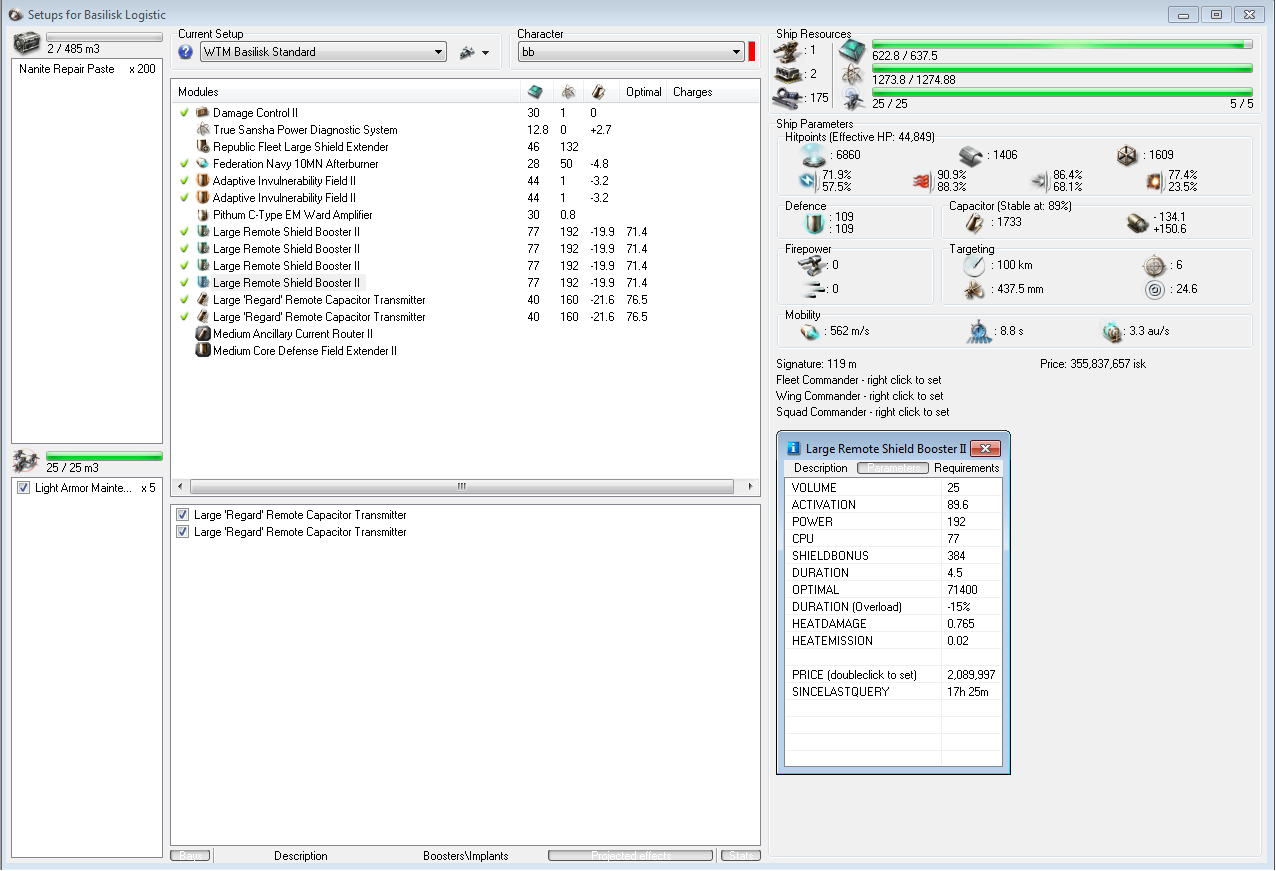 While assembling the ship I checked WTM and TVP to see where the queue is smaller for Logi. WTM seems to be looking for logi, while TVP had 5-6 on their waist list (WL). So I started burning to WTM's dockup system. 20 extremely long jumps later (Logis are slow for my taste!) I arrive, dock and X up in the channel.

At first I add "noob incursions" to my text. But after ~45 minutes of waiting I just simply type "X Basi Lvl4 4-2" in chat. With the whole text being a link to my fit.

Suddenly I get a fleet invite! I accept and start figuring out whats going on. I know I have to join TS, so I quickly try to get it sorted :) The fleet MOTD says Basilisks have to join a separate chat room. I join and then quickly leave as I think I should be here only if I'm with the fleet!

About 5 mins pass and I'm asked to "Come on grid". My best guess is, that I should try warping to the Logistics Anchor (LC) and be on the same grid as the fleet. I also join Basi Logi Chat. "Oh yeah! The cap chain! FFS!"

In my previous post I forgot to mention that logi usually needs to set up a cap chain. You need 2 cap transfers with logi 4 and only 1 cap transfer with logi 5 to be cap stable. In Basi Logi Chat you have to type your logi level and then the LC will update the MOTD, which will tell you who your cap buddies are... I got a bit confused with the cap chain sometimes... It sounds simple, but because with Logi 4 and Logi 5 pilots mixed, there are "free caps for fleet". This meant, that I only had to transfer cap to one logi constantly and had a spare cap transfer for pilots requesting cap!

My overview was a mess! Watchlist, Fleet history, locked pilots, cap chain pilots, fleet chat : all new stuff! This was my display after the first site: 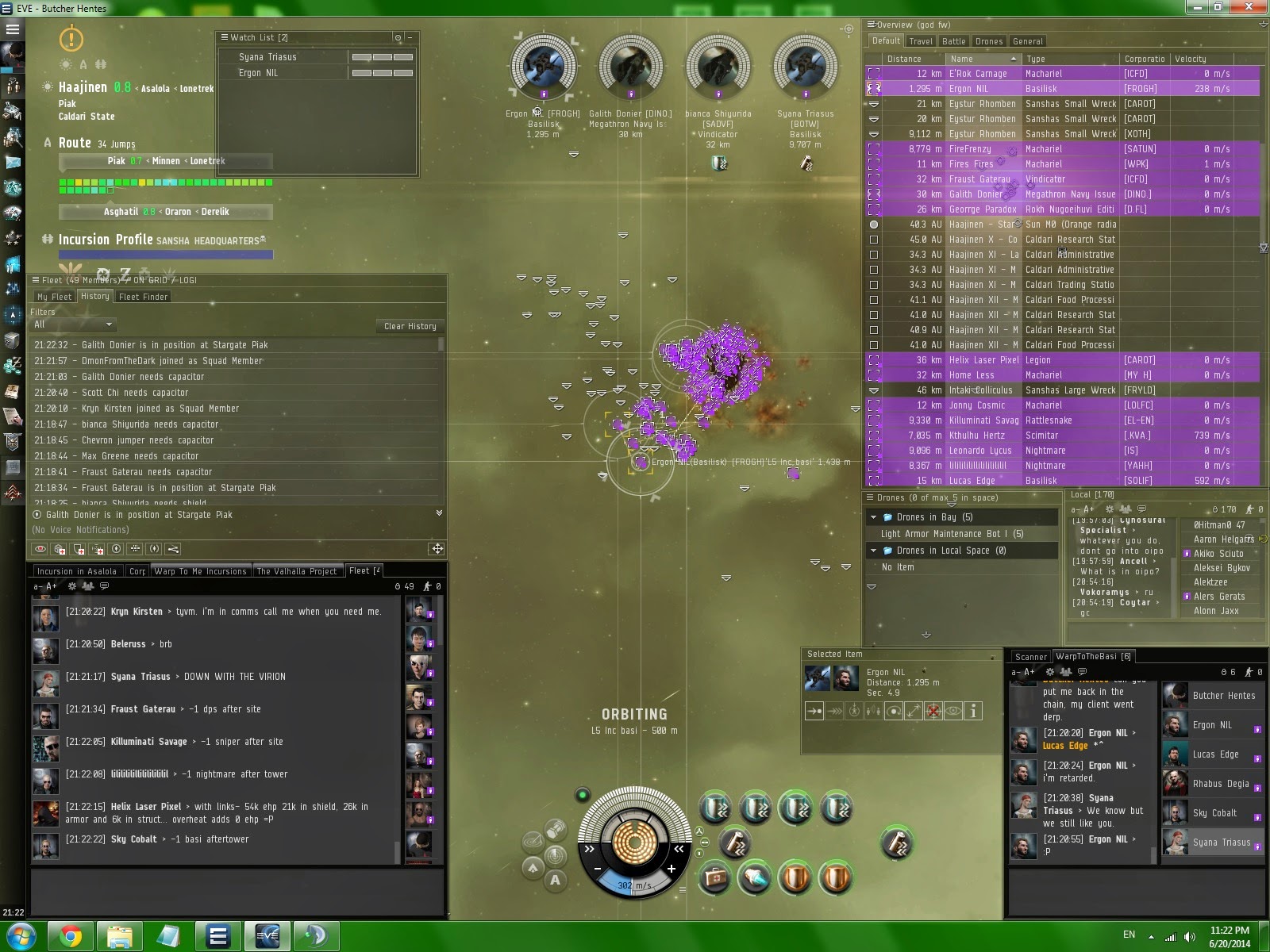 I was never screamed at or anything. Things were going all fine. I had a few pretty small mess ups with the cap chain and once a flew away from the fleet because I forgot to orbit the LC :) I was also kicked from TS once because my CTR+SHIFT used to be my talk button, however I used CTR+SHIFT+CLICK to unlock targets. No biggie though! Was kicked, set myself on mute, then joined again.

Follow the FC's instructions and read what your LCs says. That's about it!

I had no idea what types of ships these sites contained. All I knew, is that when people request for shields or cap, then you lock them and activate your modules :)

Ran 6 sites but I have no idea what their names were. Could probably Google them, but I will just call them: Site A (with the 3 gates and the tower bash at the end) and Site B (when there are no gates and you complete the site with rats still on the grid).

Site A was pretty easy I think. Nobody got into armor and didn't really need to use all my 4 reps. Took longer though than site B. Site B is the harder site! Aggro switches could be a pain if they were sudden and a logi or a "not so pimped ship" was targeted. Still these "sketchy" situations were nothing compared to WoW raiding when you dropped to about like 15% HP. The biggest damage was done to a Legion who ended up at 75% Armor when reps landed and he was healed back to top!

People were very pleased with the Logi! Supposedly we were doing a great job. Well, I guess, we didn't let any ships die, so we were "great" :) Still, the funniest was when in a site B there was an aggro switch and a Vindi was getting raped big time. He was dropping but reps were good and ~30% shield was the max to which he dipped. After repping him through all the aggro he called out on coms and thanked the logi for saving him and that he is greatly thankful and that we are awesome!!! People were teasing him and I started laughing also! LOL!

This was the payout: 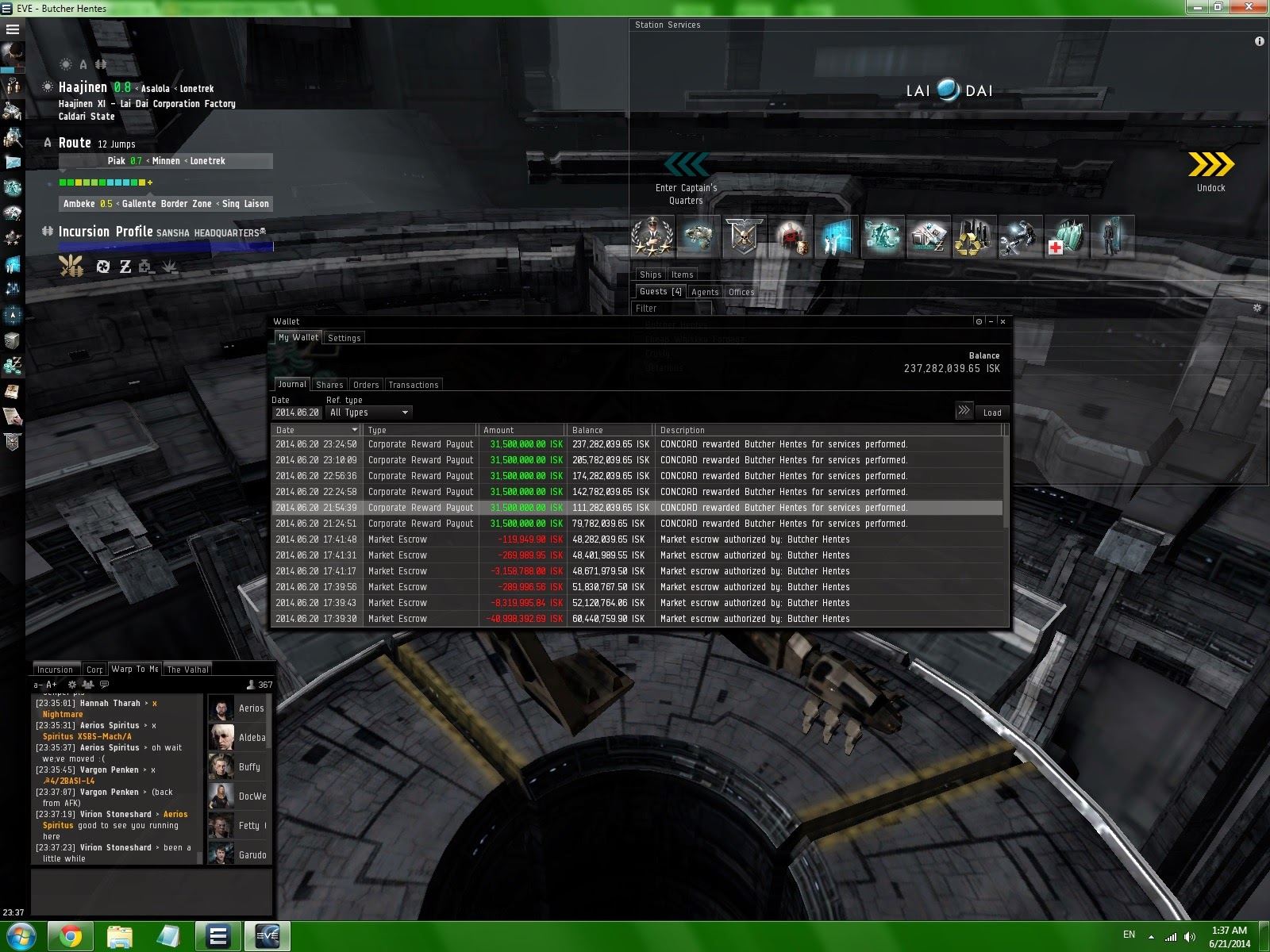 6 * 31.5MM =  189MM in exactly two hours! Not bad, but that was actually around 3 hours of game time, because one hour was just waiting to get into a fleet :) So about ~65MM true ISK/hour. As you can see site B is much faster to clear than site A. Doing Site B's you can easily push ~120MM ISK/hour. Thats pretty much risk free, because you got SRP in case you loose your logi :)

This was all written right after I ran the Incursions. Going to probably write up a follow up posts when the experiences settle down a bit :)

In conclusion:
Trading is still the best way to make money! 100MM ISK/Hour is nothing! But Incursions are fun because you meet a bunch of new people and you are not just docked in a station hoarding your ISK!
Going to think on other aspects too!

Posted by Butcher Hentes at 8:00 PM

Try EVE for 21 days!
Eve Mail me or convo me: Butcher Hentes
Happy to talk and feel free to ask!

Information about the blog